The last electric itinerary took us to Le Marche for a relaxing weekend of culture and beaches surrounded by nature. This time we’re opting for a longer weekend, in the middle of summer, to enjoy by electric car one of Italy’s most popular regions: Sicily.

Our electric itinerary in Sicily: one of Italy’s most popular regions.

Having landed early in the morning on the beautiful island – and the region with the largest surface area in Italy – after crossing the Straits of Messina, our first stop is Barcellona Pozzo di Gotto, where Be Charge is present with more than 50 charging points.

Returning to our car, we decide to take a dip a stone’s throw from the column, at the Caldera beach. The seafront in question is just a few kilometres from the famous Aeolian Islands and has one of the most popular small pebble beaches in the area. After relaxing and refreshment, we get back into our electric car and head for Cefalù, one of the most iconic places in the region.

The town, whose population triples during the summer, sits at the foot of a rocky promontory and its visual impact is truly remarkable.

It is no coincidence that Cefalù is one of the most beautiful villages in Italy, an association of small Italian towns that stand out for their artistic, cultural and historical importance, the harmony of their urban fabric, their liveability and their services.

The town of Arab-Norman origins in the province of Palermo is one of the many pearls of Sicily, which has become a reference point for many Italian and foreign tourists. Parking in the city, especially in high season, is no easy task, which is why we head out of the centre to walk to the Lungomare Giardina without any problems.

A little tired, we decide to take a dip and stop at the Lido di Cefalù, one of the most important and well-known beaches. Shortly before sunset we rest at the hotel and then find a restaurant where we can enjoy an excellent fish dinner.

At the end of the meal we opt for a first walk in the streets of the town, choosing as a last stop the famous pastry shop Duomo Gelatieri to taste an excellent cannolo and, by now exhausted, we go to bed. When we wake up after breakfast, we head early to the Rocca di Cefalù, one of the most beautiful spots in the Sicilian town.

The path to the Rocca is made up of 278 steps and there is no shortage of history along the way. Halfway up the Rocca is the Temple of Diana, a building created to worship the goddess of water and the moon. This megalithic monument is believed to have been built in the 9th century B.C., being the only pre-classical monument in Sicily.

After another half hour’s ascent we find the ruins of the Norman Castle. This fortification was built to protect the town from possible attacks and also offers a 360º view of the surroundings, including Cefalù’s New Port and the turquoise Tyrrhenian Sea.

Once at the top, our efforts were amply rewarded by the view, which was nothing short of sensational. Having recovered our strength, we decided to return to the town centre to continue our cultural morning. The main artery of Cefalù is the Corso Ruggero, which marks the boundary of the medieval town. 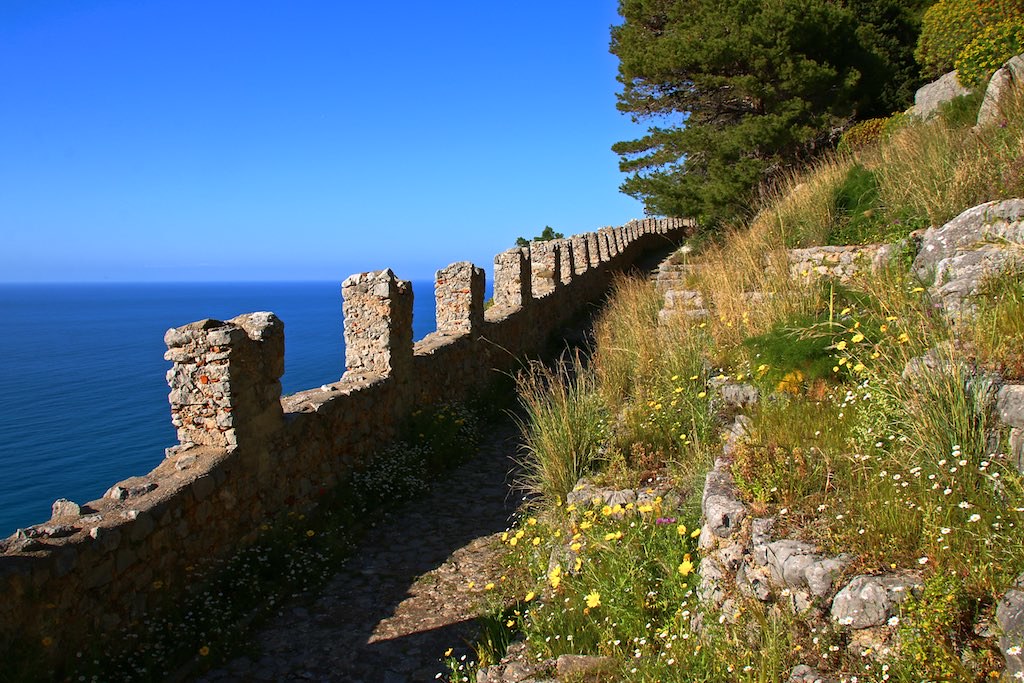 In addition to the beautiful Cathedral, which we will visit later, we decide to seek out and visit the medieval laundry Fiume Cefalino, in Via Vittorio Emanuele. Located at the mouth of the Cefalino torrent, this laundry is carved directly into the volcanic stone, and you’ll have to descend a stone staircase to get there.

Various restorations over the course of history have preserved it so well that it is now one of the most visited places in Cefalù. In the last renovation during the 19th century, bronze lion heads were added to each of the pipes that supplied the bath.

The Cathedral of Cefalù

Undoubtedly, the Cathedral of Cefalù is one of the most important sites in the town. Not every fishing village has a cathedral, especially not one this old. In fact, Cefalù’s cathedral, dating from 1131, was founded before Palermo’s in 1184.

The history of this cathedral dates back to the time when the King of Sicily, Roger II, faced a sea storm on his way from Naples to Palermo. Thinking he was going to die, the king promised his saviour that he would build a cathedral in his honour wherever he arrived safely. After landing in Cefalù, the king kept his promise and construction began immediately.

The highlight of the cathedral are the rectangular towers that give the appearance of a Norman fortress. Inside, there is a Byzantine mosaic of Christ Pantocrator with Arab-Norman features, blond hair (Norman style) and a thick dark beard (Arab style). The church has also been a UNESCO World Heritage Site since 2015.

After lunch in one of the beautiful little restaurants in the centre, we decided to spend a few hours on the beach before heading to our next destination, Palermo.

Once in Cinisi, where we have booked a hotel, we take the opportunity to leave our electric car at a Be Charge station, and after dinner and a rest at the hotel.

The Quattro Canti of Palermo

The alarm sounds early for the last intense day in Sicily. In Palermo, the best way to start the day is to visit one of the historic markets. There are four main markets: Capo, Ballarò, Borgo Vecchio and Vucciria, for convenience we choose to visit the former.

Amongst the fruit, fish, granite, arancini and a thousand other delicacies, you’ll be spoilt for choice. Leaving the market, the first point we see is the Quattro Canti, a true architectural masterpiece, the octagonal square that is the symbol of Palermo.

On the lower level of the structures is a representation of the four seasons, on the upper level are four Spanish kings, and on the even higher level are the patron saints of Palermo. Just off the Quattro Canti side is another famous place in Palermo: the Fontana Pretoria. 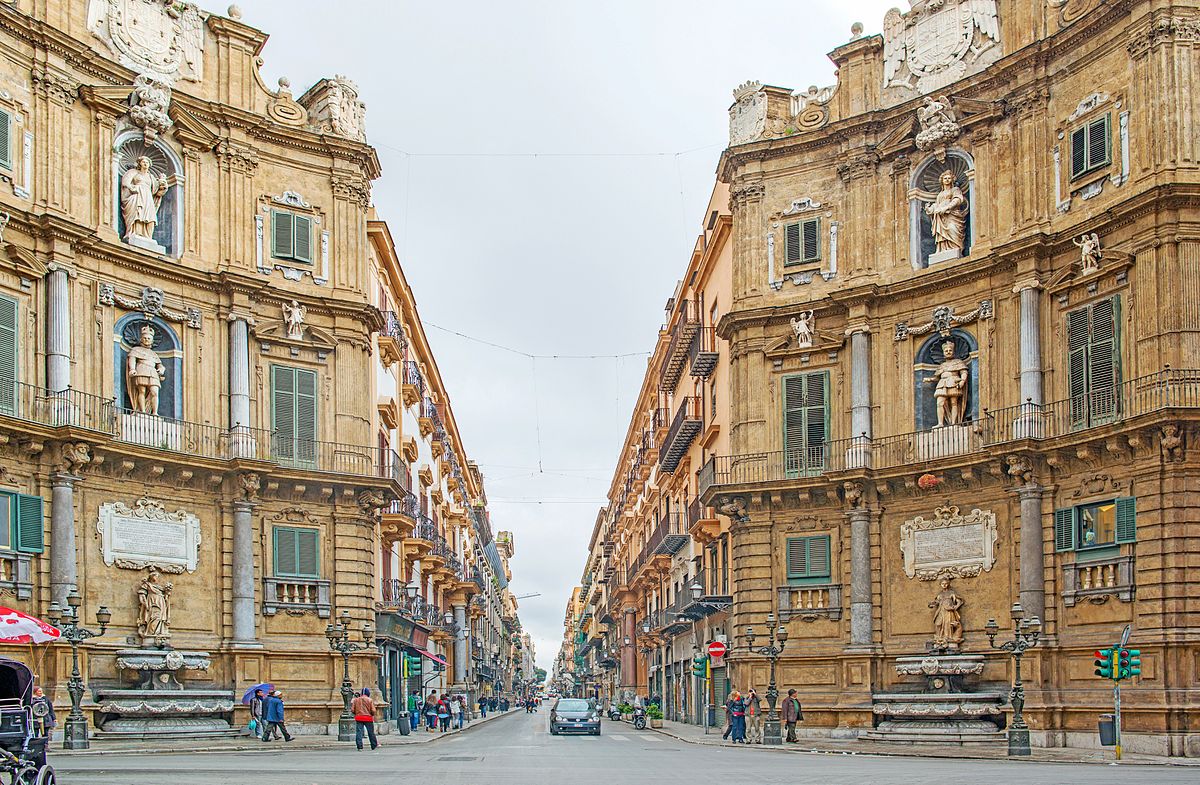 The fountain, which dates back to the 16th century, is also known as the Fountain of Shame because of the naked statues that surround it. Another interesting fact is that this fountain was originally created for a garden in Florence and then moved to Palermo.

Continuing our tour, we arrive in front of the famous Teatro Massimo. If you’ve seen The Godfather Part III, you’ll certainly have spotted the Teatro Massimo, which is the third largest opera house in Europe. When Al Pacino and company leave the opera house towards the end of the film, they’re walking down the very front steps of the building.

A stone’s throw from the theatre, one cannot fail to notice Palermo’s majestic cathedral, also known as the Basilica della Santa Vergine Maria Assunta. Already from the outside you can see a fine mix of Arab and Norman architecture, which is even more appreciated when you enter.

Another real jewel of Palermo’s city centre is the gold-covered Palatine Chapel inside Palermo’s Palazzo dei Normanni, which not coincidentally in 2019 was the only Italian church in the Daily Telgraph’s ranking of the world’s 23 best basilicas. 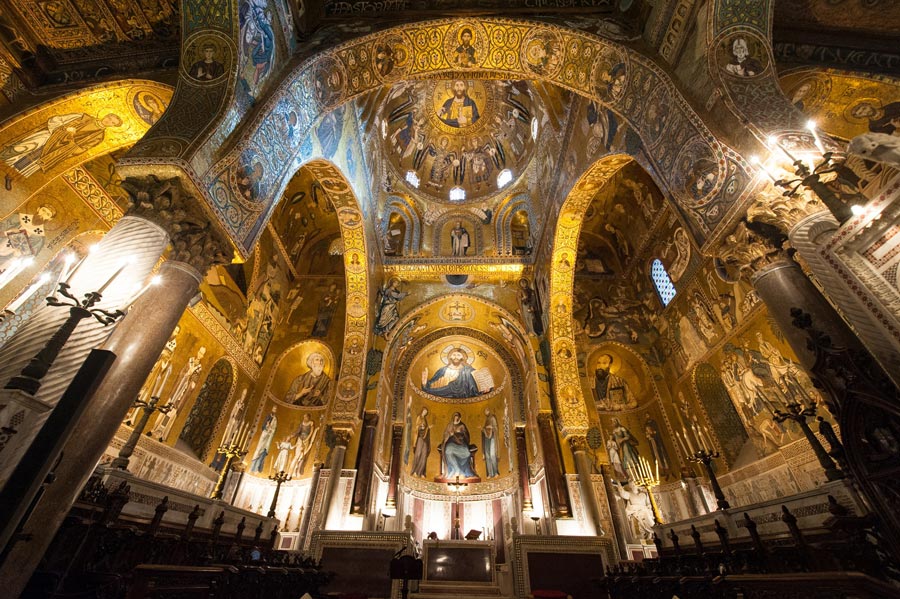 Arriving at lunchtime, we are very hungry and head to one of the area’s most popular inns, Caffe del Kassaro. At very cheap prices we decide to taste some of Palermo’s characteristic delicacies.

After lunch on Corso Vittorio Emanuele, we go to retrieve the car for the last stop of our short holiday: Mondello beach. We spend the afternoon on this beautiful beach, a bit crowded but enjoyable nonetheless.

Before sunset we leave, heading for the port of Palermo where we have the ferry home, promising ourselves to return to Sicily as soon as possible, strictly by electric car. 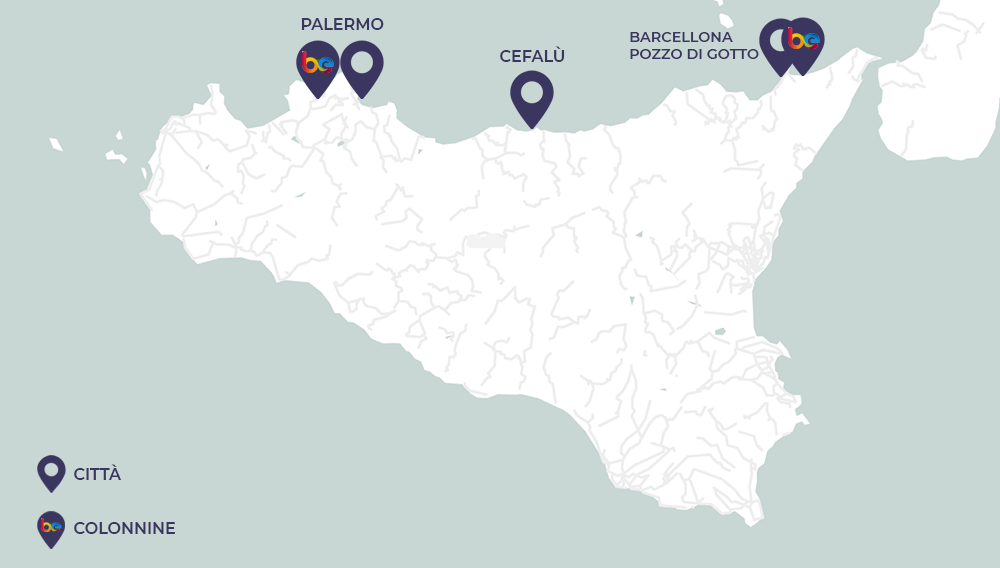