For this new electrical route of the E-Mobility Green Travel, we decided to take you to two cities full of history, symbols of Umbria and beyond: Assisi and Perugia.

Since the 18th century, hundreds of thousands of pilgrims have flocked to Assisi every year to venerate St Francis, who was born and buried here. However, you don’t have to be religious to enjoy the beauty of this picture-postcard town. Framed by the long, rolling hills of Umbria and the forests of Mount Subasio, Assisi is one of the best preserved medieval towns in the world and one of Italy’s most fascinating gems.

The town’s religious influence is also reflected in its ‘sister’ towns: Assisi is twinned with Bethlehem and Santiago de Compostela, among others. Today, Assisi is considered a worldwide symbol of peace. It has hosted three meetings of the world’s major religions, convened by Pope John Paul II in 1986 and 2002 and by Pope Benedict XVI in 2011. It was also the home of St Clare, who was personally inspired to follow the path of God by St Francis and helped form the Order of Poor Clares that still exists today.

Our December weekend starts early with an obligatory visit to the Franciscan city (UNESCO heritage site): the Basilica of St. Francis. The church has a very important collection of frescoes and paintings that would make many museums envious.

The Basilica is literally majestic, so much so that it can be seen from miles away. Construction of the Basilica began soon after the death of St Francis in 1228 and was officially completed after the addition of the upper church in 1253. The structure is in fact divided into an upper and lower church, both unique in their own way.

The upper church – or Upper Basilica – is covered with 28 frescoes by Giotto (created by the artist with the help of members of his school), depicting scenes from the life of St Francis. Although completed centuries ago, the frescoes are in excellent condition. The lower church, or Lower Basilica, houses frescoes by Cimabue, Pietro Lorenzetti and Simone Martini, who were strongly influenced by Giotto’s work.

Also in the lower sanctuary is the Crypt of St Francis, the monumental tomb of St Francis of Assisi. While the upper church appears to be a celebration of beauty and life, the dark rooms and sparse decoration of the lower church reflect the spirit of St Francis and his Franciscan order.

There is a curiosity attached to this tomb, believed by many and doubted by just as many: the remains of St Francis were hidden soon after his death to avoid being plundered by relic hunters. His final resting place was unknown for 600 years until it was rediscovered in 1818 and the Crypt was built.

After visiting the Basilica of St Francis, we head to another place of prayer, the Cathedral of San Rufino. The Cathedral of Assisi is a favourite place of pilgrims because of its connection to the life of St Francis. It has an imposing Romanesque façade with three rose windows. Inside the church is the fountain where both St Francis and St Clare were baptised. The Cathedral was dedicated to St Rufinus after he converted Assisi to Christianity in 238 AD. According to some, the saint’s remains still lie in a Roman sarcophagus in the cathedral.

At lunchtime, we are spoilt for choice as to what to eat. We opt for a starter of local salami and cheese, with an excellent pasta alla norcina. With our bellies full, we drive to the last religious stop of our stay: the church of Santa Maria degli Angeli. The basilica, with its domed structure, dates back to the 16th century and is located about 5 kilometres from Assisi, near the railway station.

The sanctuary is famous for housing the Porziuncola, a tiny stone structure considered to be the home of St Francis and his followers, which has now become a small church within Santa Maria degli Angeli. This is presumably the house where St Francis founded the Franciscan order and also where he died in October 1226. It is an excellent stop for pilgrims and also a must for anyone interested in the history and culture of relics within the Catholic Church.

There are plenty of churches to visit (the Church of San Damiano, the Basilica of Rocca Maggiore, the Basilica of Santa Chiara and many others) but, given the Christmas period, we decided to return to the centre of Assisi to enjoy the atmosphere and activities related to this time of year.

The Christmas spirit is really strong in Assisi, perhaps because St Francis is often credited with being the first to create a living nativity scene, a tradition that is still strong today. Walking around Assisi, there are many corners with nativity scenes for sale or on display. On the lawn in front of the Basilica of San Francesco is the monumental nativity scene, which includes human-sized figures, a huge Christmas tree and various other stands and works of art. There are also Christmas markets and many other events in the town. A little cold, we head back to the hotel, ready for the second day. 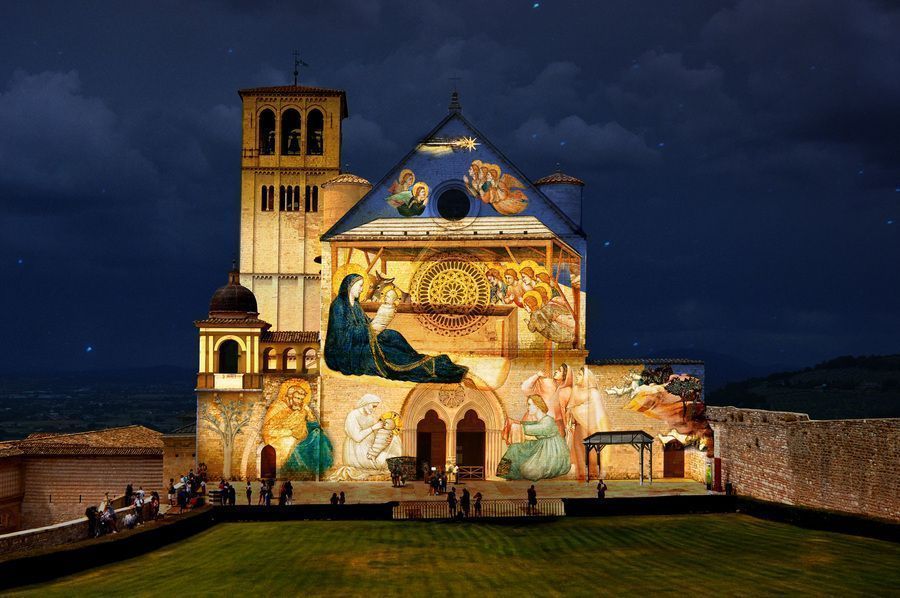 After a pleasant drive of half an hour, we deposit the car at the Be Charge station in Via Campo di Marte and begin our tour. Why not start with probably the most impressive building in Perugia? We are talking about the Palazzo dei Priori, located in the centre of Perugia’s historic centre, once the seat of the civil magistrate and then of the local governor.

On the other side of the Palazzo is Perugia’s unique Cathedral of San Lorenzo. Its architecture is unconventional, as is its position, with the side facing the city’s main square. Along the sides are numerous statues, a pulpit and the Loggia del Braccio.

The square overlooked by the church is Piazza IV Novembre. An important presence in the square is the Fontana Maggiore, beautiful by day but very special at night. During the Christmas period, the square also hosts a small Christmas Market, and we take the opportunity to visit it.

We continue our walk along Corso Pietro Vannucci, buying some delicious souvenirs from the various chocolate shops. The street full of shops, decorated in an original way for the holidays, reflects the passing of time in the old and sometimes decaying buildings, but also its architectural splendour.

Peckish, we decide to try the city’s famous Porchetta in one of the many street food trucks scattered around the streets of the capital. After regaining our energy – the city also has a number of climbs which are not always easy to negotiate – we continue our visit by opting for some of the most suggestive markets in Perugia, those of Rocca Paolina. Their peculiarity lies in the fact that we are talking about a totally underground market, under a medieval fortress.

The stalls are located under the Rocca Paolina, south of the centre of Perugia, in a series of tunnels that climb up to the historic centre from below. Inside these tunnels you will find more classic souvenir stalls and more original ones, from gastronomy to other Umbrian craft specialities, such as leather goods. 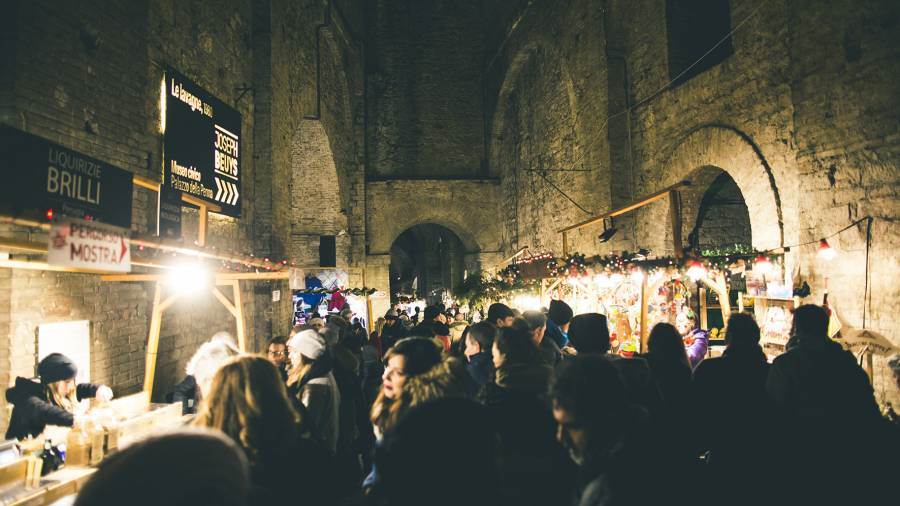 Arriving at dusk, we choose one of the most beautiful spots in Perugia to enjoy the sunset, the belvedere of Porta Sole, the highest point in the city. From the belvedere you have an almost 180° view from north to south, where you can appreciate the unique geography of the province. 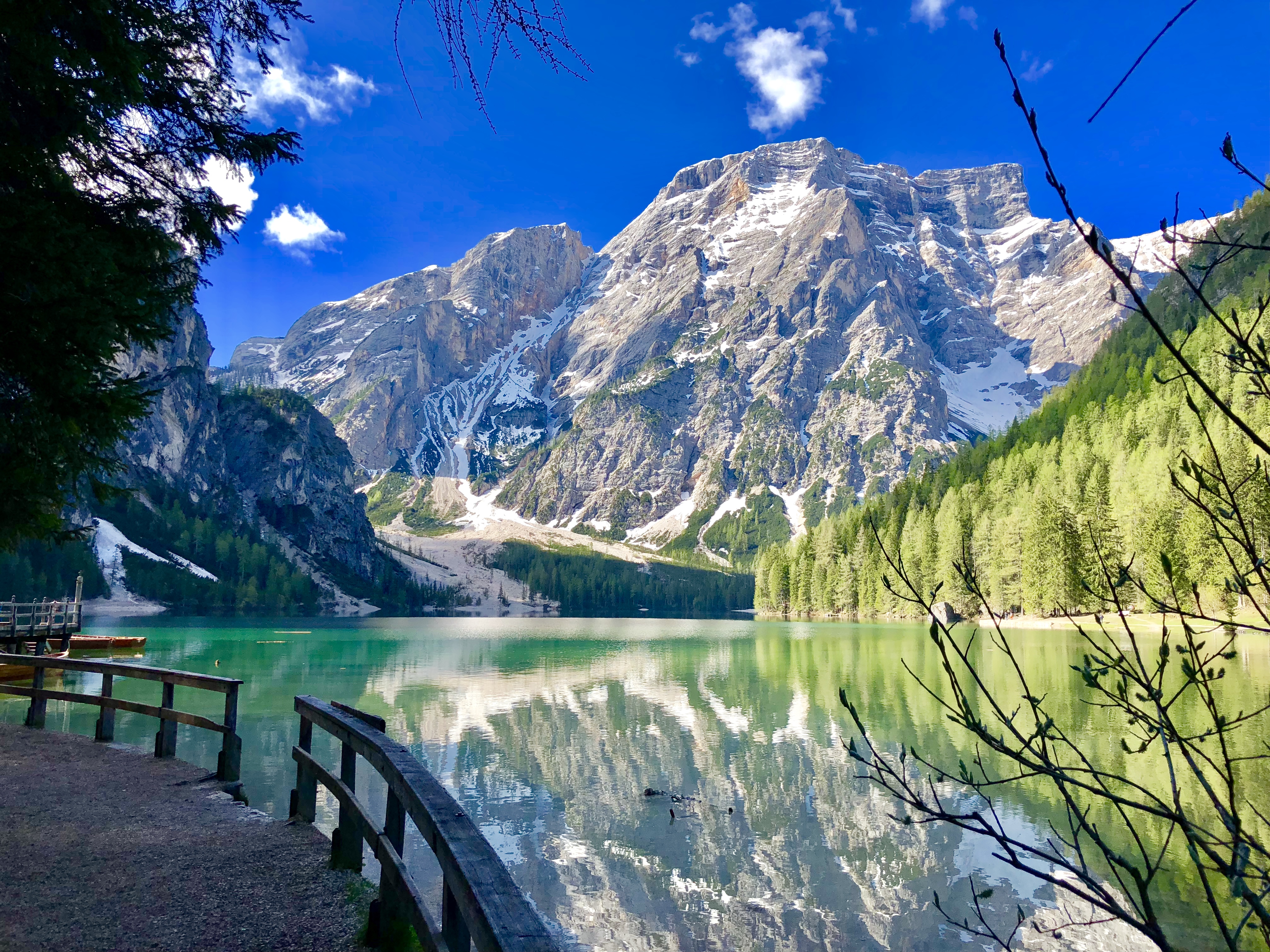 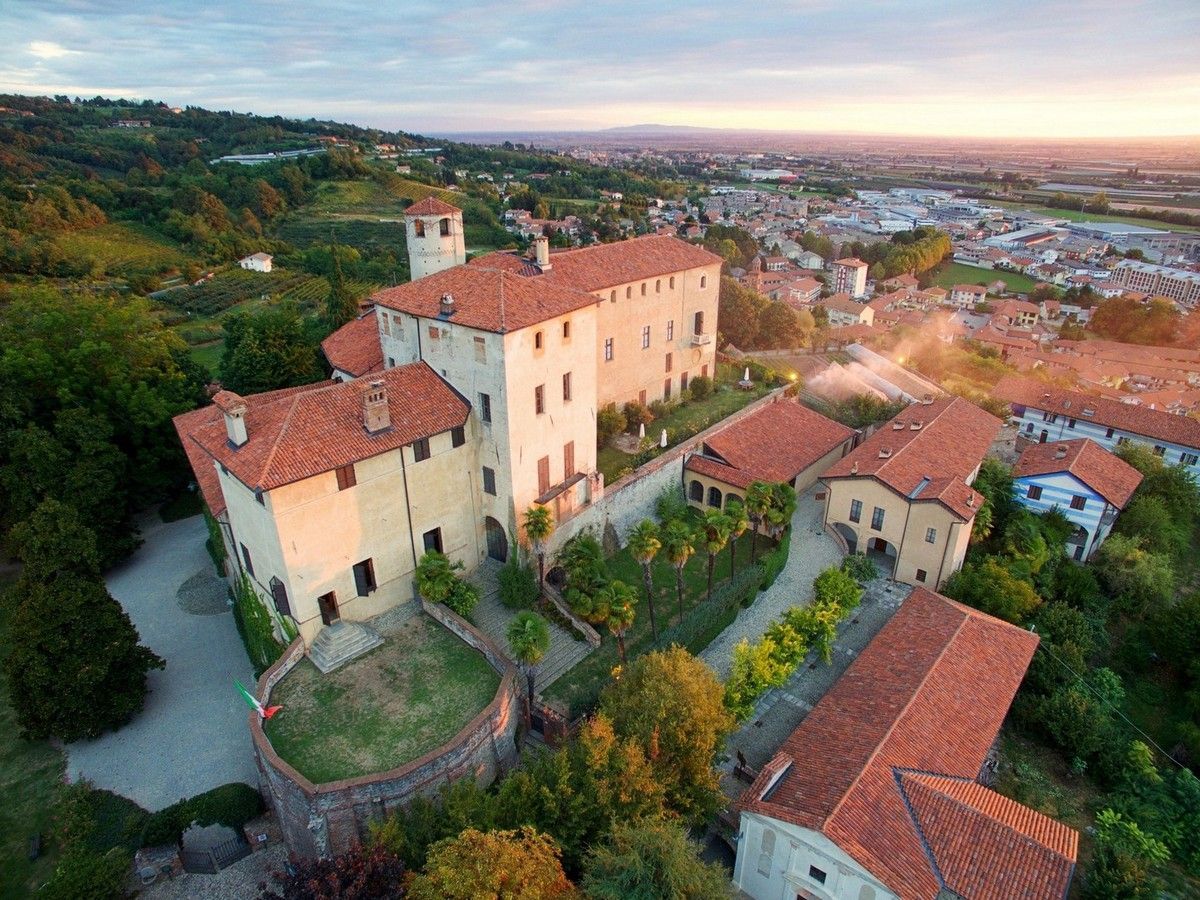 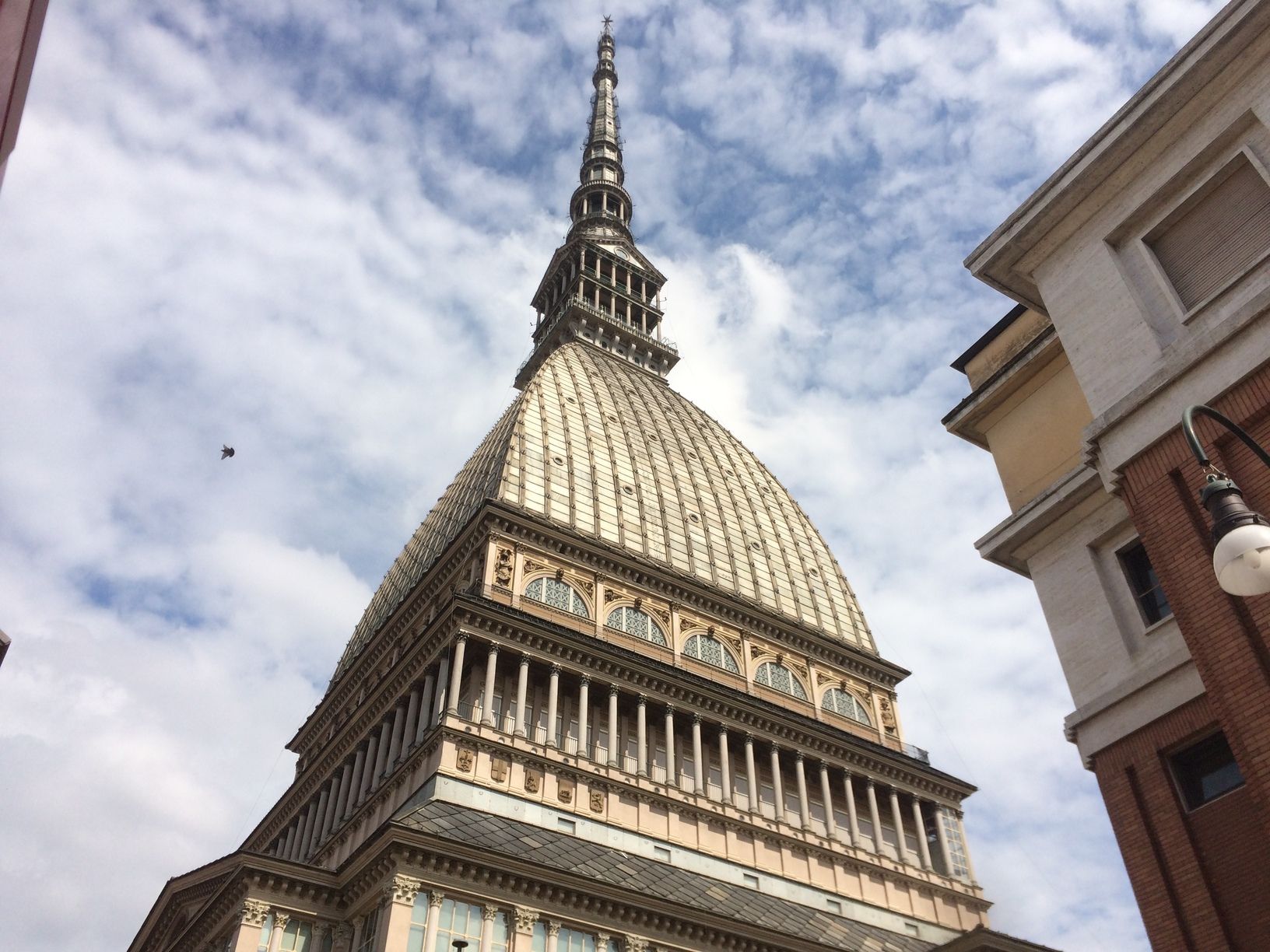 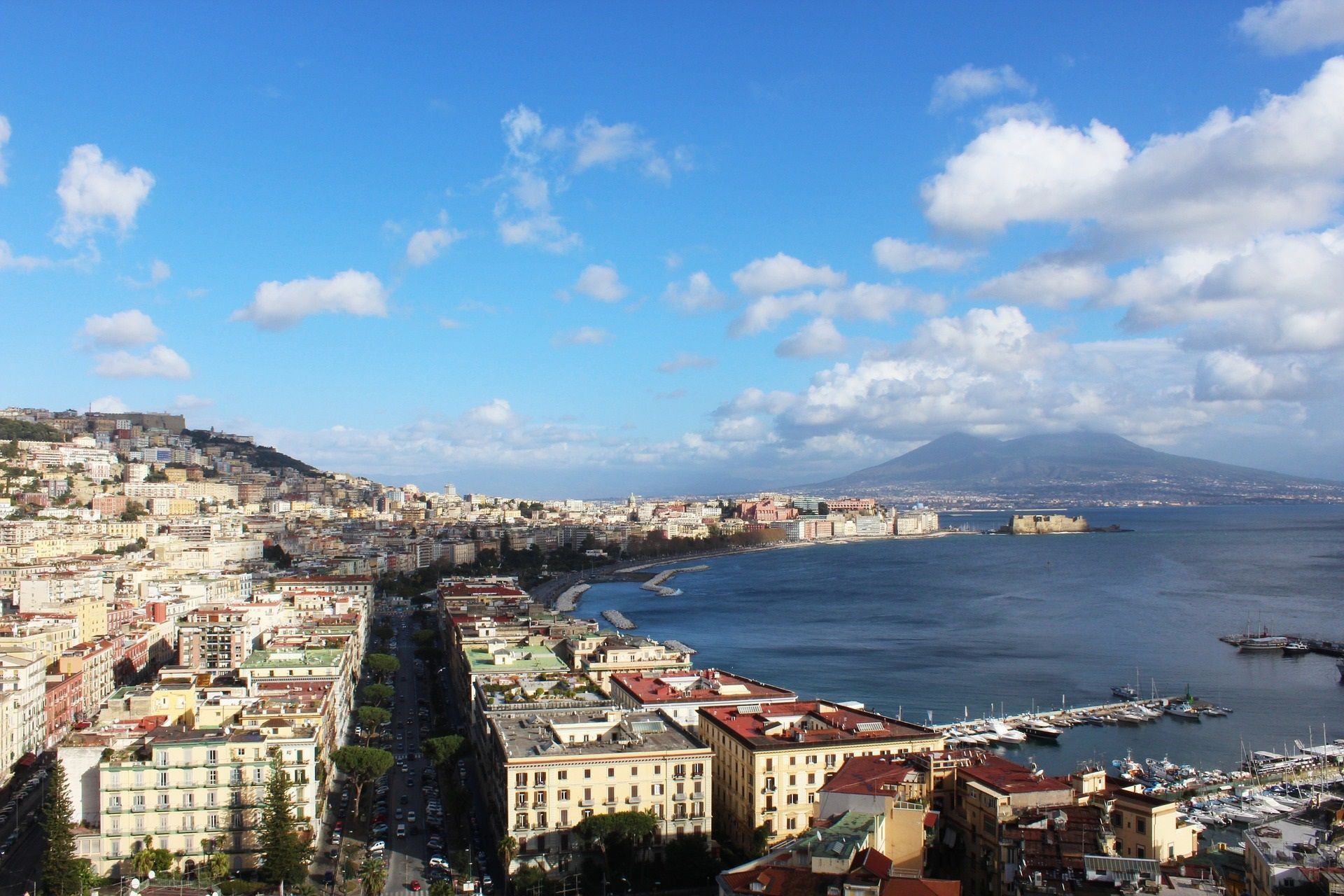